Static lookup lists include values you define, used as a reference to search and match elements across your code. For example, you can create lookup lists of allowlisted or blocklisted usernames, IP addresses, regions, or domains.

Lookup list values are only string-based and do not support ranges. OpenSearch Dashboards, however, supports range-based searches, such as IP: [127.0.0.0 TO 127.*].

You can reference lookup tables in a security filter.

In Static lookups, you define fields and values that do not change during the task run.

By default, all new lookup lists are created without an expiration period. To set the Default Time to live (TTL) for new lookup lists, at the top of the Lookup lists page, click Change, select No expiration or a period between 1-364 days, and then Save your changes to apply them or Cancel the change.

Create or edit a lookup list via CSV file upload

Create a large lookup list of up to 200 elements, or update the elements of an existing list with a CSV file.

Prepare a CSV file that includes between 1 and 200 elements:

If your CSV file includes elements that are already in the lookup list, the values are merged and the comments in the uploaded file overwrite the existing comments. 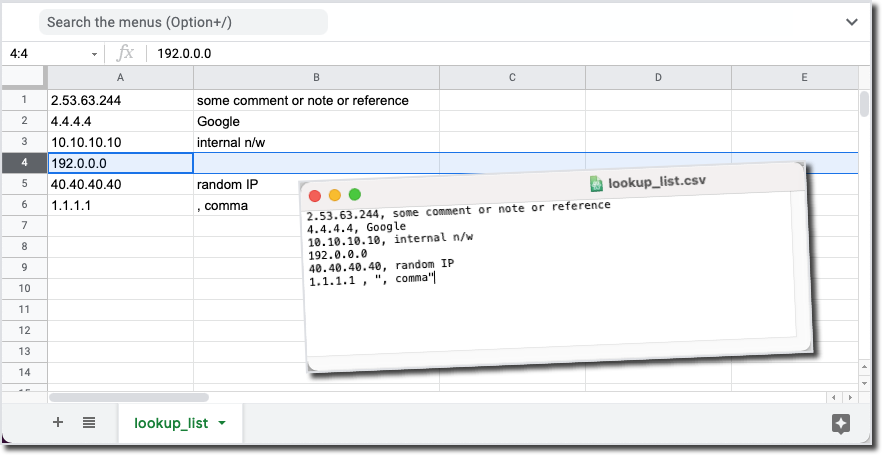 Learn how you can use a query to create a Dynamic lookup list.

Contribute to the docs
Report an issue